Her father sings his country walking through Blue Mountains.

He sings each place calling, calling out to spirits,

Late night, she listens to her father.

She won’t understand, must not be afraid.

Waiballa have taken much land.

She must help her people, learning waiballa language, their ways.

She must be brave.

Remembering he loves her, he will come back.

He removes her hand, continues.

She should trust him.

She is alarmed, clear this night is goodbye.

Her aunt mothers look, lying near a fire, crying.

This child Mary Burrarone, is not afraid in killing times.

Her father finds her, lying in soft valley grasses.

Picking her up in great dark arms. A funeral of a burning man.

Walking, walking to a new town.

She is eager to see waiballa, taste beef.

Long hot walk, asking, where they are going?

High up on father’s head, he can’t hear her.

A town dressed with roses, blooming, blooming behind picket fences.

Watching dog, longing to touch it.

She pulls her father’s arm, wants to hold this magical thing.

Waiballa has feelings of benevolence towards native people.

This word ‘gift’ can’t be correct, is she passed into another man’s hands?

No one will harm her, he loves her.

Tribal law protects children, she was not chattel. Chattel.

A captain in red wool looking, talking slowly, as if her father is stupid.

She saw that look on father’s face before, a gift bag of flour, the first time.

Joking, had they given him white dust or ochre paint?

No good, he said, threw it, bag bursting like a cloud.

They all laughed. A tribe kept eyes on him, seeing what to do.

These ghost men had fire sticks that killed.

Wondering how to behave, father, their star and moon.

When people, point, laugh, you are the reason for laughter, it burnt you.

Damper bread given from saddle bag.

Except her father: tree standing tall, turning his back, mob walking away.

Only later: begging, begging for one scoop of waiballa flour.

Pulling shift over her head.

Knowing ghost men like nothing more than this, this moment of taking, taking

Bringing shame to them all.

An introduction to Black Mary and Gungies, both plays
written by award-winning Aboriginal playwright, Julie Janson,
provides interesting historical background. Centering on
different aspects and periods of Aboriginal life and people,
both plays are illustrated with photographs. They are
recommended for Years 7 to 12 Australian history,
Aboriginal studies drama and literature.

Black Mary tells the story of Aboriginal bushranger Mary Ann
and her partner, Captain Thunderbolt, roaming northwestern
New South Wales in the mid-nineteenth century. Dressed like
the men, Mary Ann is one of the gang, managing to survive in
the outback and to elude capture most of the time. She dreams
of returning with Thunderbolt to live with her people but
instead witnesses their massacre and plots revenge.
The play performed in Sydney by Belvoir Street Theatre.

A contemporary play, Gunjies combines family life, young
love, a football match and a debutante ball with political
activism, racial discrimination and uneasy relations with
police (the gunjies). First performed in 1993, the
International year of Indigenous People, Gunjies was
highly commended by the Human Rights Commission
and was also nominated for an Australian Writers
Guild award.

You can purchase from aiatsis via the link below. 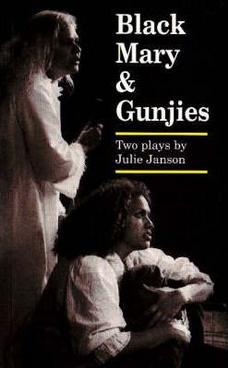 Can you see this picture – in Ngiyampaa and Gamilaraay country?

in the outback, a Toyota police car cruised on a misty, quiet as death, night,

near the outback town of Wilga, a tidy town

the holding of desperate crying men and women with blood-spattered cushions,

passing silently through a desert cattle station, biggest in the whole world,

a monument to what Whitefella gubbahs could steal, keep and clear fell trees

and wreck with abandonment in

‘Assumption of the Virgin’ sky

the dark tree line on a high river bank, the Darling River,

a brown dead dribble, a dribble

they see a running dinewan, emu and crashing lightning, it’ll set your hair on fire,

but no water ngaru-gi, fit for drinking

head in the Dreaming Serpent’s path

pearl tongue flickered around Orion’s belt, the moon rose, gunjie drove on beneath its

the vehicle lurched over rocks, getting dark

while thorn bushes crowd the wooden posts, strung with the crucified corpse of a

its great yellow beak bent to kiss the earth

they rattled past abandoned lives with rusty signs: ‘BP Service Station’ in

gazed at forlorn building, wondered whose life had been spent out in the middle of the

hairy yelling: ‘give us back our dead’

he saw a shadow move inside ruins, a windowed screaming woman’s face

he shifted in his hot sticky car seat, chewed his nails, feeling deep unease, a rising,

chest tight, a vice and maybe he would have a heart attack any day now

and that would teach them.

shut that steel trap of teeth and wait until the noise died down, they would stop asking

questions after a while

sensations of total inexplicable anguish grew grew, until around a bend:

a ghost, a goonge, in white ochre and blood, in the headlights, a few seconds

his semi-naked dark body trembling, his head gashed and flowed with gore

his mouth crying: help, hold me in your arms, a warm embrace,

ghost fingers trembled, a drop of blood fell to earth, his eyes wept to watch it

he tried to restart, the starter whined, whined and he turned the key, again and again, it

near Wilga, a tidy town